The innovative cap contains a unique “Slip & Seal” mechanism that prevents ink from drying out in the pen.

When a fountain pen has a push-fit cap there is an airtight seal, however opening and closing the cap causes ink to spurt out due to a change in air pressure, which is called pumping, and it is extremely hard to prevent this occurring.

It has been considered difficult to make an airtight pen with a screw-type cap and if not sealed tightly, the following problems can result:

At the request of customers, Platinum Pen Company went back to the basics to deal with this problem. The #3776 Century was the first fountain pen to have their unique “Slip & Seal” structure in a pen with a screw-type cap. Thanks to this innovation it is possible to have a screw-type cap with complete airtightness. 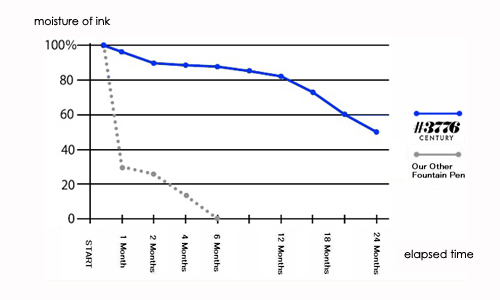 Very efficient and helpful. Would definitely recommend them.
13-05-2022
Review By Brendon Caligari,

Having bought pens, inks and a variety of stationary from 'The Writing Desk' over the last couple of ...
11-05-2022Verified Purchase
See all Reviews