The following document is from KWZ to provide general advice on the use of their iron-gall based fountain pen inks. 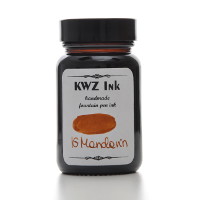 About the use of KWZ Iron Gall inks

KWZ Ink iron-gall inks are so called "modern" Iron-Gall inks, they differ in to Iron-Gall inks that were prepared at the beginning of the twentieth century because KWZ iron-Gall inks are true solutions – they do not contain any suspended solids, nor do they incorporate strong mineral acids to stabilize ink (like muriatic acid or sulfuric acid for example).

It is recommended not to leave it unused for a long time in order not to let the ink dry out in the pen, otherwise it might be difficult to clean the pen. In the worst cases, this ink may damage your pen if left too long.

A pen filled with IG ink needs some special care, similar to when any permanent ink is used. The key here is not to let your pen dry out as this will leave a residue that can't be cleaned out. How long it can be left depends on your pen - a cheaper pen may dry out quicker but this is depends on your pen.  If IG inks are used on daily basis, there are no special requirements as the ink will not have dried out.

The Iron Gall series by KWZ Ink refers to the type of ink used in medieval times for writing manuscripts, but it has been designed as a modern fountain pen friendly ink. It is gaining popularity because the written notes are extremely long lasting on paper, as the color will darken over time as opposed to other inks, which tend to fade over time. Writing with it is fun, as the colour will change immediately. For example the pink ink becomes violet, the orange will become brown. The written notes are also water resistant to some extent. The dyes can be washed away, but the iron gall component is permanently bonded with the paper, so the text is still easy to read.

The range of Iron Gall KWZ Inks includes 3 types. IG Mandarin is light iron gall - it means that the iron gall component concentration is very low and the maintenance doesn't differ from using standard ink. IG Blue-Black is Archive Iron Gall, which means that the concentration of the iron gall component is very high, thus it is the most water resistant and the most permanent of the whole IG KWZ ink range.  All the other IG KWZ inks - blues, greens, violets, reds or brown are the medium type - iron component concentration is high enough to make the notes everlasting, but low enough to be highly convenient in daily use. We still recommend taking precaution when using any IG ink as we don't want you to damage your pen.

Iron Gall ink should not be left in a pen unused for long periods of time. If the ink is allowed to dry out in your pen it will be difficult to clean out and in the worse case the pen could be damaged if left for too long.

It should be noted that in case of leaving Iron Gall ink in an unused pen for a very long period of time, and depending on its drying out on many factors, it is possible for the corrosion of stainless steel nibs to occur. Nibs made of for example gold, titanium, palladium, platinum, silver, etc. are generally resistant to corrosion.

Iron Gall inks are waterproof inks and require compliance with a number of recommendations, following these guidelines will protect prevent any problems that might occur during the use of Iron Gall inks in fountain pens.

Well stored Iron Gall inks are a true solution, there is no solid residue suspended the ink. Only after application of Iron Gall ink on a substrate (ideally paper) and after evaporation of most of the water does the reaction occur which produces the water-insoluble complexes of iron with an intense dark colour.

It sometimes happen that after Iron Gall ink dries in fountain pen a residue of insoluble sediment might be left in pen. There are several methods that allow us to remove this residue of  Iron Gall inks from inside the pen:

Thanks so much - ordered a Safari for my brother, who lives in an EU country. No problem and the pen ...
19-01-2022Verified Purchase
Review By Neil Evans,

The Writing Desk not only has an amazing range of bottled inks but it also posts them really quickly ...
18-01-2022
Review By Andy T,

I've used the writing desk a couple of times, they have always sent out orders promptly, they arrive ...
11-01-2022
See all Reviews