> Visit to the Yard-O-Led Factory

Visit to the Yard-O-Led Factory

In February 2016 we made a fascinating trip to the Yard-O-Led factory in Birmingham. Based in Birmingham's Jewellery Quarter, the factory is in a basement unit at the Jewellery Business Centre. The building itself is accessed through an archway with the most fabulous "tree" gates. Sculpted from steel wire and strip by Michael Johnson when the building was converted from a factory in 1989. 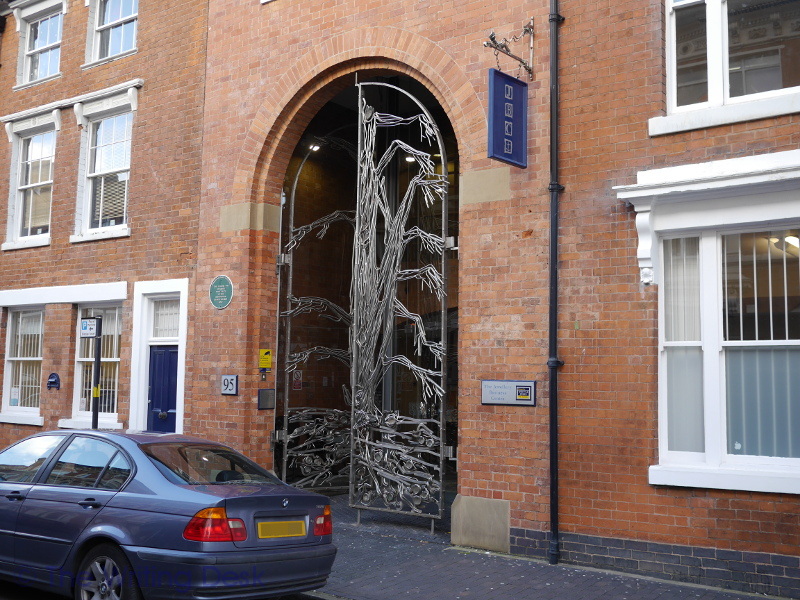 We were invited as one of Yard-O-Led's valued partners to take a tour of the factory. Delighted at the prospect of a behind the scenes glimpse of the manufacturing processes the tour by Alex, one of the skilled silversmiths employed by Yard-O-Led, did not disappoint.

Here it is in pictures:

Every Yard-O-Led writing instrument starts its life as a length of sterling silver tube. These tubes are supplied by another factory in Birmingham in eight different diameters. Here is Alex holding a length of silver tubing. 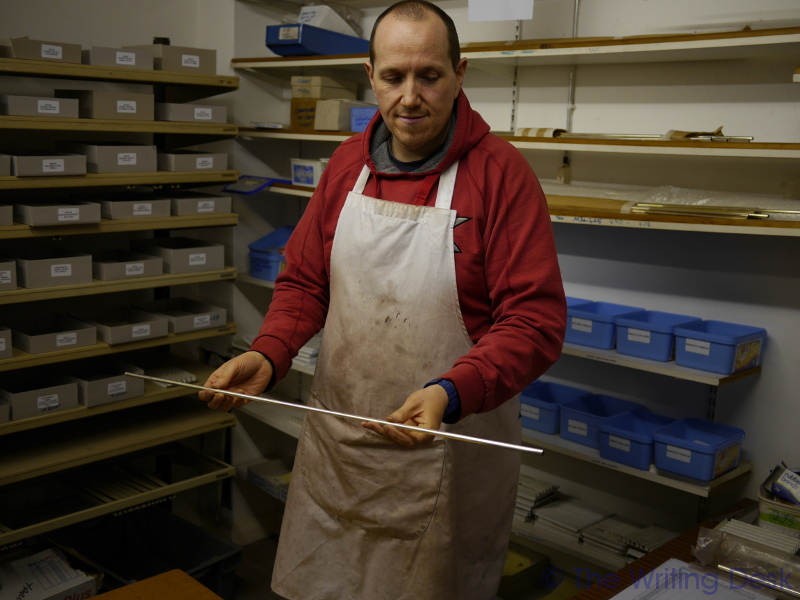 Once the tubing is cut to the correct length, the next stage is to form the shape of the barrel by swaging. This process requires one of the few powered tools in the Yard-O-Led workshop. 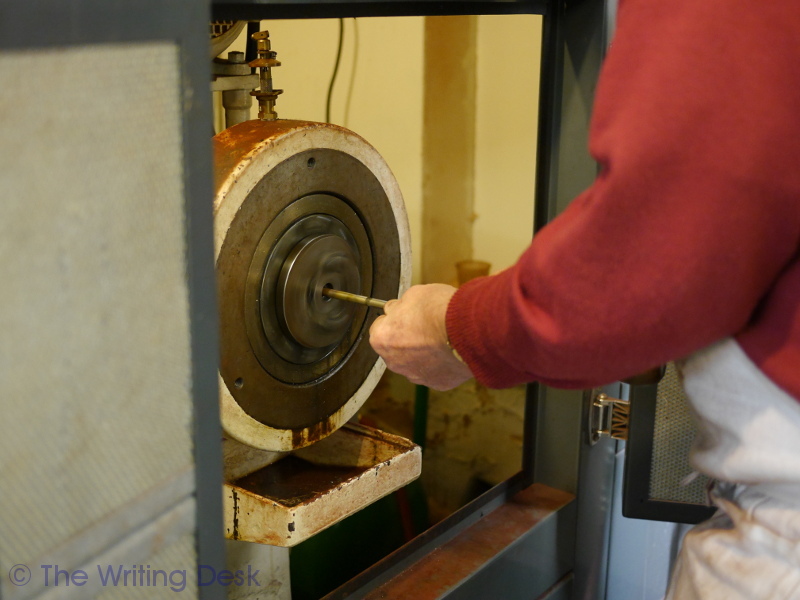 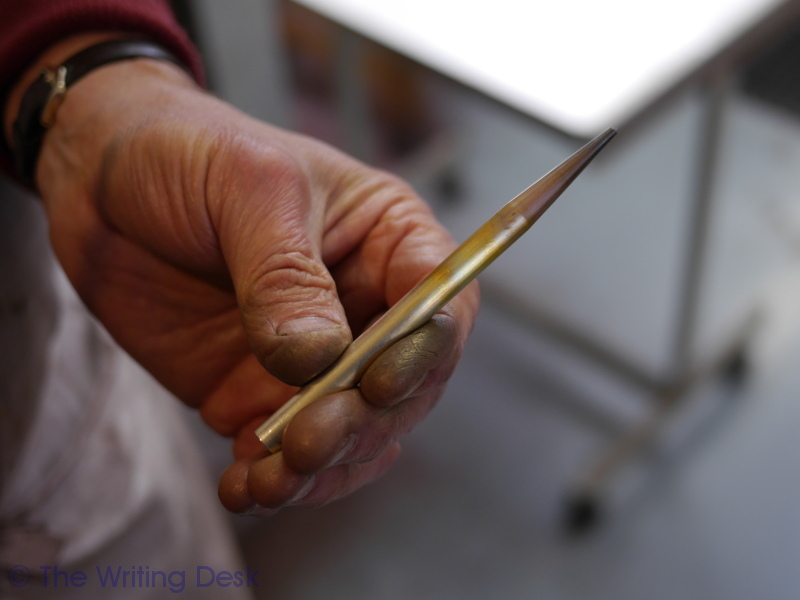 Raw pen barrel after swaging to form the point

After initial polishing, the next stage in the process is to apply the finish to the barrel or cap. Yard-O-Led currently has four finishes: plain polished, barley, lined (exclusive to Smythson's) and the ornate hand-decorated "Victorian". Yard-O-Led's barley and lined finishes are created using a guilloche machine dating from the 1930s. This machine can engrave the pattern on two barrels simultaneously but requires great skill to ensure the pattern is applied uniformly. 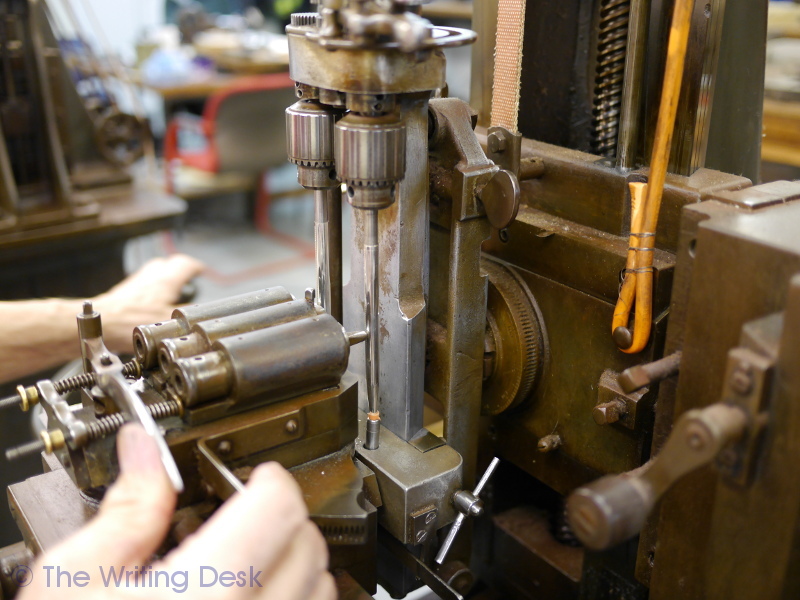 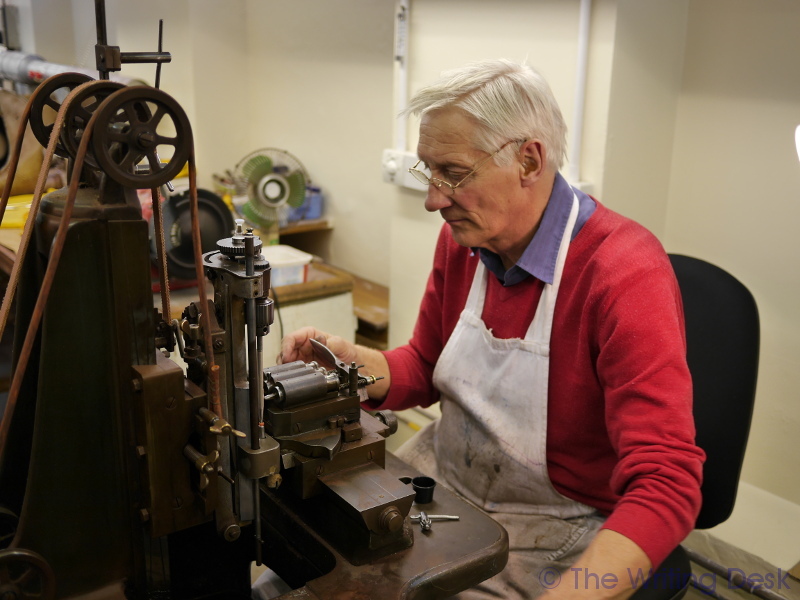 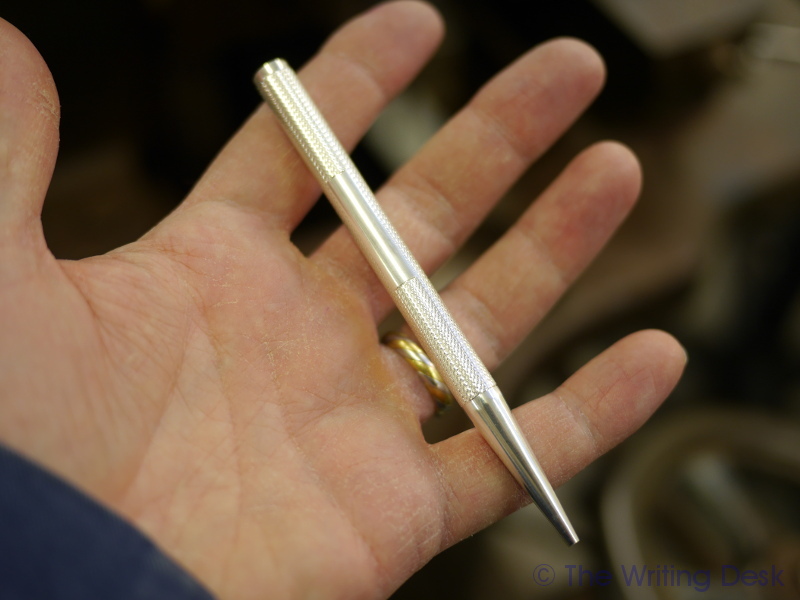 Yard-O-Led is perhaps best known for its ornate Victorian pattern that is available on certain Viceroy and Perfecta models. This pattern is applied entirely by hand by punch and hammer. Three of Yard-O-Led's silversmiths are trained to create this unique finish which can take up to two hours to complete. 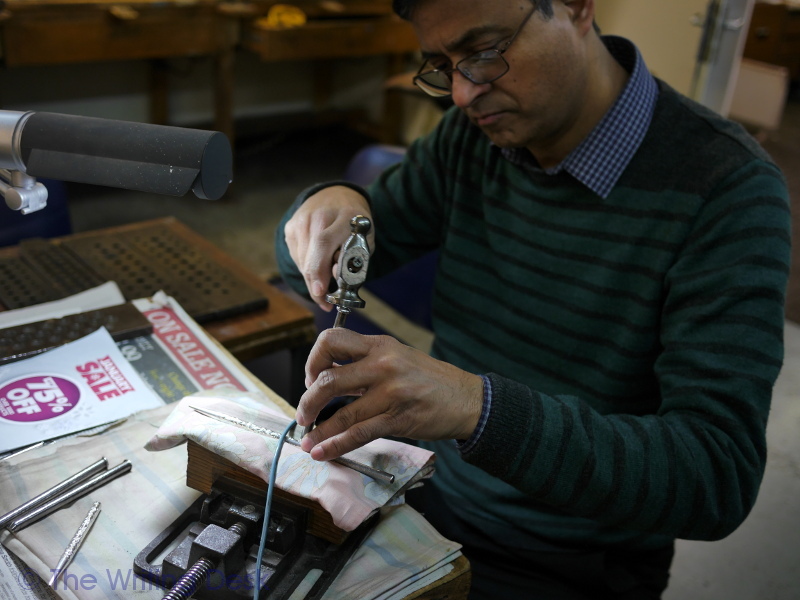 Silversmith Krish hammering the Victorian pattern into a pen barrel

Since the Victorian pattern is created entirely by hand, any pen with this finish could have been produced by any one of three Yard-O-Led silversmiths. Each one can identify their own and their colleagues' work. 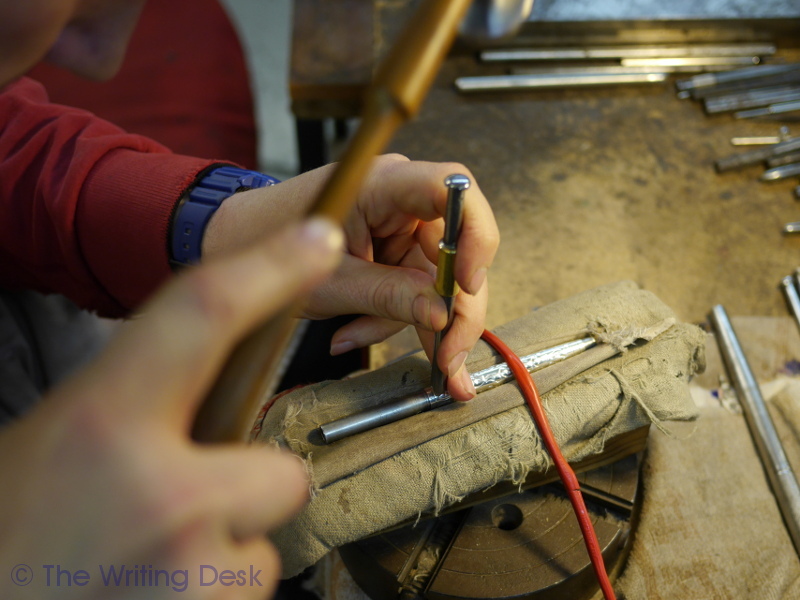 Silversmith Alex creating his version of the Victorian pattern 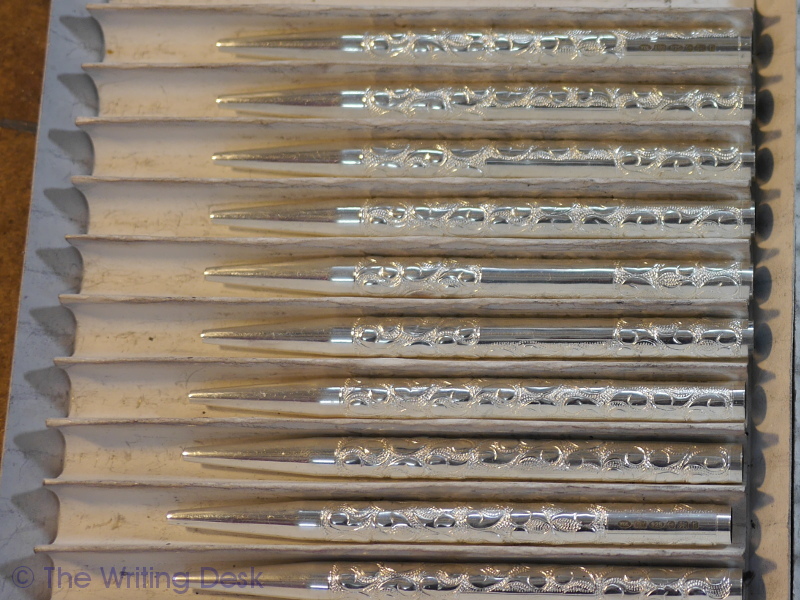 When the barrels are finished and sent for hallmarking (at the Birmingham Assay Office), the pen is ready for assembly. Yard-O-Led uses a distinctive clip design on all its current models and this clip is created using no fewer than seven stamping and folding procedures. The "U" shaped part to the right of the clip in the photo below forms the rivet. This part is offered up inside the barrel and then stamped to hold the parts in place before the joint is soldered to ensure a firm attachment. 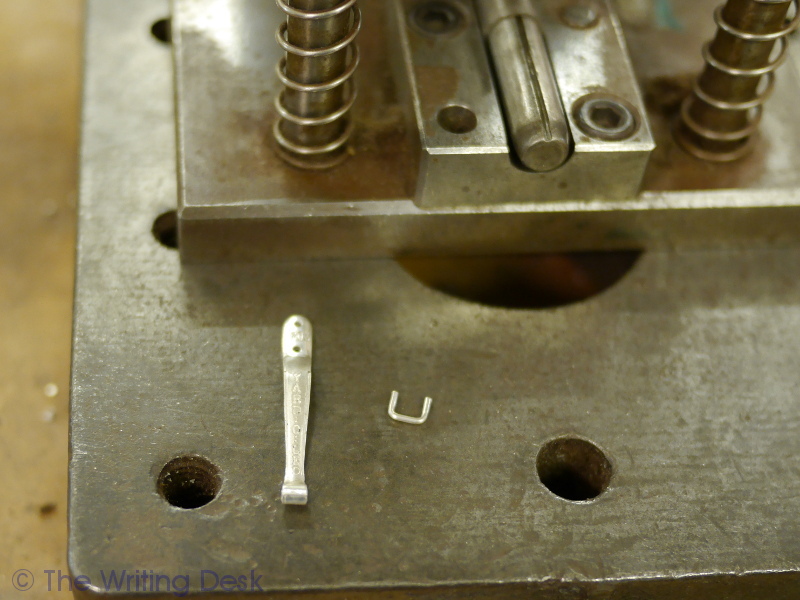 After assembly, pens are given a final inspection and polished to perfection. 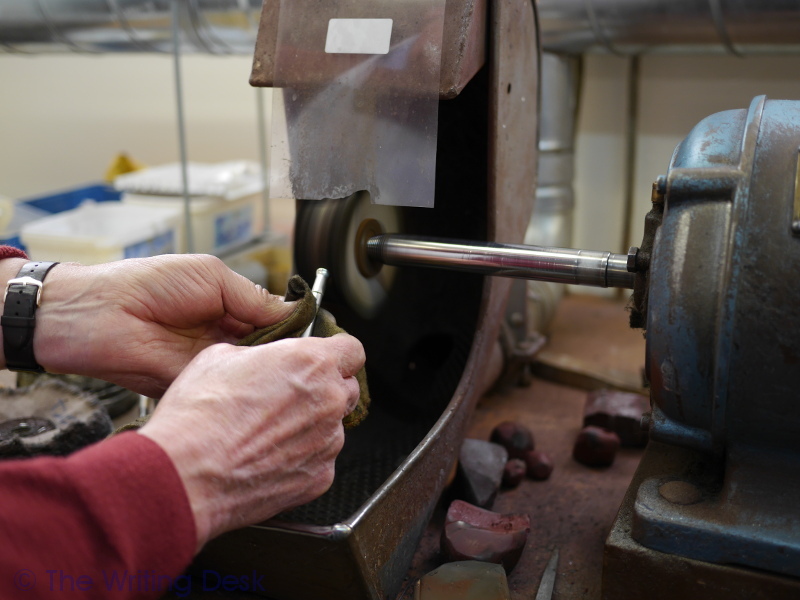 Nowadays, the term "hand made" can mean a lot of different things to different people. After our tour of the Birmingham workshop of Yard-O-Led it was clear to us that when the company states that their unique sterling silver writing instruments are "hand made" they really do mean "Hand Made". Not only that, but Hand Made in England: a rare commodity in the 21st century.

Brilliant service as ever - my pen was packed well and arrived quickly. The pen itself is a real tre ...
22-06-2022Verified Purchase
Review By Paul Cheesman,